In a recent edition of The Sydney Morning Herald’s Traveller section an article was published comparing a self-drive safari staying in the Kruger National Park’s national park accommodation and a private game lodge safari. Travel Africa feel that the argument the Herald put up against a self-drive safari staying in national parks accommodation was flawed and felt a response was necessary. Here is our full letter to the editor:

I was very disappointed to read “National Park or private game reserve?” by Mark Daffey in The Traveller on Sunday, June 25, as the piece (accompanying a solid article on “When it’s game on, on safari”) gave an unbalanced and flawed account of the options available when considering a safari in southern Africa. As the owner of a business which promotes both types of safari options – national park and private game reserve (Travel Africa – www.travelafricayourway.com.au), and a traveller who has been on numerous safaris in southern Africa for over 20 years (including safaris on both private game reserves and national parks) I have the following objections to the piece:

– “Self-driving safaris are possible in KNP, at times making animal sightings similar to being at a zoo”. This is a non-sequitur. Just because private vehicles can drive in national parks does not make them a zoo. A zoo intimates that animals are caged or kept in certain areas. This is not the case and most national parks can actually offer much larger habitats for animals than fenced private game reserves. During our self-drive safaris in national parks in southern Africa we have had the privilege to experience numerous sightings of the big five, and more often than not have had these sighting completely to ourselves or shared them with just one or two other vehicles. For example, we spent 2 hours with a pack of 15 wild dogs devouring 2 impalas in 2013; a stunning twilight half hour eye to eye with a female leopard on low branch in a tree in 2015, and day watching 3 tiny lion cubs whose mum had hidden them in long grass while she went hunting – all in Kruger National Park. Some would argue that having private game reserve guides radio each other information about sightings – so that the vehicle you are in suddenly shifts gear and zooms to a different area for an important sighting – makes it more like a ‘zoo’ experience with little spontaneity or effort put in for a sighting and much less satisfaction. There are certainly times when the southern part of Kruger gets crowded and there can be many vehicles at certain sightings, but it is important to remind tourists that there are well over 3,000 kilometres of roads in the 20,000 square kilometres of Kruger National Park (the area of Israel or Wales!), so it is very easy to get off the beaten track to find a road, waterhole or animal sighting with no other vehicles in sight.

– “Not only can you see the big five, but you’re more likely to appreciate the little guys as well”. The little guys are just as prevalent in national parks as game reserves and self-drive tourists are just as likely to appreciate them. In fact, they may appreciate them even more as they have done the hard work to spot the small things and work out what they are. There are numerous hard-copy and internet-based information guides which self-drive tourists can use to work out why the dung beetle may be rolling a ball of dung, why chameleons change colour or why guinea fowl always seem to run in a comical straight line down the centre of the road.

– “Most private game reserves permit only two vehicles in a single sighting, amounting to more intimate wildlife experiences that allow better photographic opportunities.” Because private game reserves only allow two vehicles at a sighting you often find yourself spending less time at the actual sightin, as you have to move on to allow others in, and you also spend a lot of time ‘queueing’ up waiting for your turn. Although the sighting is well worth it, I would argue that this is not quite the ‘true African experience’ either. Please do look at the many photographs taken by ourselves on our website – the vast majority of these were not taken on private game reserves but in national parks on our own self-drive safaris. An added benefit for photographers on self-drive safaris is that you can spend as much time as you like at a certain place or with certain animals – waiting for that perfect moment or perfect light. In private game reserves you often have to move on to tick the big five off the lists of other tourists in your vehicle or make space for other waiting vehicles.

– “For night drives, go private”. This section is factually incorrect as the main camps in Kruger National Park offer guided night drives (both sunset drives over the sunset period and night drives leaving 8 or 9pm) and ranger-led guided morning walks. In addition, other activities offered by the qualified national park rangers include evening bush braais (in essence a night drive with dinner in a secluded bush setting), mountain biking, multi-day guided 4×4 trails, guided 3 or 4 day hiking trails and much more.

– “Choose your luxury level”. The information is correct but the section fails to explicitly consider the issue of cost. Yes, more luxurious accommodation is available on private reserves, but many people cannot afford this accommodation or if they can they can only stay for 1 or 2 nights. Many tourists would rather choose value for money over luxury and would rather spend 8-10 nights staying in clean and comfortable accommodations in Kruger for the cost of 2 nights at Sabi Sabi Bush Lodge in Sabi Sands (approx. $1800 per person). This is also an important consideration for “Adults only, or family friendly”. National parks are a superb option for family safaris with kids of all ages (and indeed we have travelled with our 3 kids on self-drive safaris from the age of 18 months)– giving families the independence to stop and start as you and the kids like, not having to worry about annoying other guests and enabling the kids to really take on the challenge of spotting, identifying and paying attention to the amazing wildlife of southern Africa.

I strongly believe that your readers deserve a balanced and correct account of their options and the pros and cons of each. Some tourists prefer and can afford the luxury option and private game reserves. Others prefer national parks. In our experience, many of our clients have chosen to combine both options and get the best of both worlds – spend a few days self-driving in the national park before completing their safari with a couple of days of guided luxury in a private game reserve.

A shorter version of the above letter was published in the letters section of the following weeks Traveller section – see below. 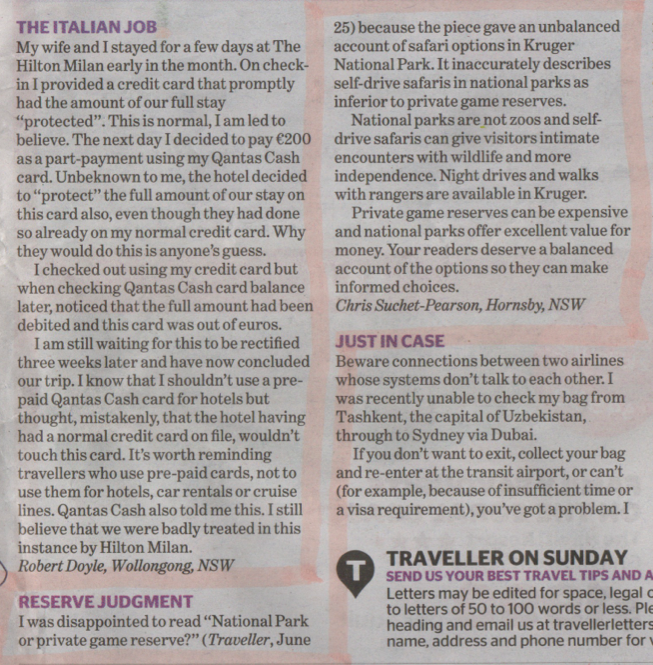